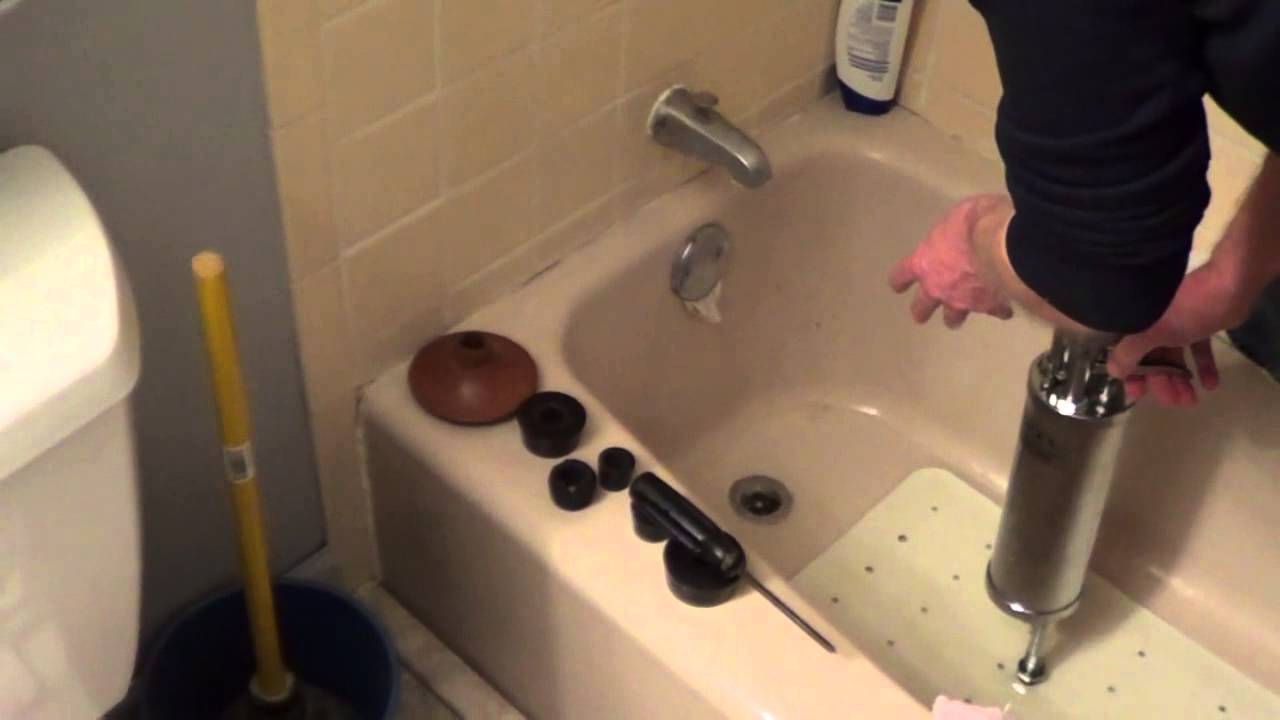 Bathtubs are one of the essential features of any house. Baths provide relaxation, cleanliness, and often a beautiful view for homeowners. Bathtubs also act as an escape from the stresses of everyday life for many people. Won’t the bathtub drain? Here’s what you can do about it! Bathtubs that don’t drain properly usually have one or more problems with their overflow holes, plumbing connections or drains. In this blog post, we will identify these problems and what you can do about them!

The Drain Stopper Is Stuck:

A built-in stopper may be found in most bathtubs, especially shower combos (mainly if they are built-in). Bathtubs with stoppers are easy to identify because the drain is usually located in the center of the tub. Won’t the bathtub drain? If your bathtub is not draining correctly, then the chances are that this is why! Bathtub drains get clogged up all sorts of objects like hair or soap scum (gross!). The most common solution for removing a stuck object from a bathtub is to drain it by using baking soda and vinegar together. They both react violently when combined, which dissolves obstructions quickly.

A stopper will stop the bathtub from draining. This can happen if it becomes damaged or if it is old.

If you suspect that a broken stopper is preventing your bathtub from draining, attempt to remove it. Use pliers to pull the stopper out of the drain. It might be blocked by a wad of hair or damaged in some way. This may help unclog your bathtub right away.

If this is the scenario, you may replace the bathtub stopper or clear out any built-up gunk or hair.

You Have Clogged Drain Pipes:

A bathtub won’t drain because of clogs in the pipes. Over time, these develop because of things like soap, dirt, hair, and other things.

Bathtub drains become clogged by tiny bits of soap that stick to the drain. Bathtubs also get dirty from dirt and sand or residue from cleaning products like shampoo and conditioner.

Try plunging it first if you suspect your bathtub won’t drain because it is blocked with built-up gunk in the pipes. This might be enough to clear out a buildup, so your bath will start draining again.

You can unclog your drain by doing this. But if it is near the top, you will need to take off the top of the pipe. You will need to be careful not to push it further down.

Your Drains Are Full of Hard Water Buildup:

Some homes have a lot of minerals in the water. This is “hard water.” Hard water can make it hard for the pipes to move. The minerals build up and block the pipes, which can cause clogs. Hard edges also build up on hair and soap scum that will stick to those areas, making them worse.

The pH levels in your water might be high. If they are, this could be why the bathtub won’t drain. You can get the pipes cleaned out or install a water softener to stop them from getting clogged up.

What to Do if Your Bathtub Is Full of Hard Water Buildup:

The best solution is a product called “water softener.” You add it in when you run the dishwasher or washing machine, so your water stays clean all the time. Unfortunately, most homes are not built with hard water treatment systems already included. So if you want to get rid of the buildup from calcium deposits on your bathtub, try using vinegar first (it won’t work for everything).

Is It Possible to Unclog My Bathtub Drain Myself?

Some people fix their bathtub drain by doing it themselves. People might use the temporary solution.

First, try to use a plunger or a snake that is like a string. You can use it to unclog the pipe. If you cannot solve this problem, you should ask for help from someone who can fix pipes.

If your bathtub is not draining, pour boiling water. This will melt soap scum and hair so the drain can unclog. But you need to pour the boiling water directly into the drain opening, or it won’t work.

There are many chemicals available in the store to unclog your drain. But these can be dangerous. Chemicals make fumes, and if they get in your lungs, you might feel sick or faint. Mixing chemicals can make them worse!

Using these sorts of chemical drain cleaners to unblock the bathtub might also harm your pipes. The acidic chemicals can make the metal more brittle and breakable, leading to busted or cracked pipes that are difficult to repair!

What Should I Do if I Can’t Unclog My Bathtub?

It is best to use a professional plumber to unclog your drain. If you cannot remove the clog yourself, do not use other methods because they could cause more significant problems.

Make sure your plumber is experienced in both traditional plumbing work as well as drain cleaning. To remove any extra build-up that might soon cause your pipes to stop operating, you could need to have your pipes thoroughly cleaned.

A plumber will be able to unclog your pipes safely and effectively without causing damage using specialized tools. If the blockage is severe, parts of the piping may need to be removed or replaced.

You might need a professional plumber to help you unclog your pipes. You can do this by using a high-powered water pressure machine. This will shoot a strong stream of water through your pipes to quickly remove any blockages. It will also clean out your whole plumbing system so you won’t have any more clogs in the future.

Meanwhile, there are a few more methods you may use to keep your bathtub from clogging up again. Use drain covers in the shower or tub to prevent oversized items like groups of hair or tiny pieces of plastic from going down the drain.

Regular tub cleaning might prevent soap residue, dirt, sand, and other clogging causes from accumulating. Rinse out the shower after usage and clean it thoroughly regularly.

You could also add a showerhead with a built-in filter, water softener, or de-scaler to your bathroom. These will help to remove minerals from the water and add salt to “soften” it.

The Bathtub Won’t Drain Tried Everything

When your bathtub doesn’t drain, you can try another trick. Pour boiling water down the pipe. Then pour in about half a cup of baking soda followed by a cup of white vinegar into the drain.

You can use baking soda and vinegar to clean out clogged bathtub drains. Pour boiling water down the drain first. Then, pour in about half a cup of baking soda, followed by a cup of white vinegar. Using these sorts of chemical drain cleaners to unclog your bathtub could also harm your pipes.

A blocked bathtub drain is a bad thing. It can lead to bacteria that will grow and become a cesspool. That’s why you need to fix it right away and avoid this problem!

How to Unclog a Tub?

How to Unclog a Bathtub Drain With Standing Water?

The first step is to ensure that your bathtub has been emptied before you begin. Remove the standing water from your tub using cups or buckets, then go on to remove your bathtub clog using the methods below.

Take the following measures to unclog your drains after you’ve completed everything.

You did a great job fixing your drain. Watch the bathtub to see if there is still water. If not, then you fixed it! You can also use this method on other fixtures like sinks and toilets that use drains.

How to Unclog a Bathtub?

What Home Remedy Can I Use to Unclog My Bathtub?

Put a cover on the drain. Pour a ½ cup of baking soda down it. You will need to wait 10 minutes before pouring 1 cup of vinegar down it too. Then put the cover back on and wait for natural foaming action to loosen gunk from your pipes.

How to Unclog a Bathtub Drain?

How to Fix a Clogged Bathtub?