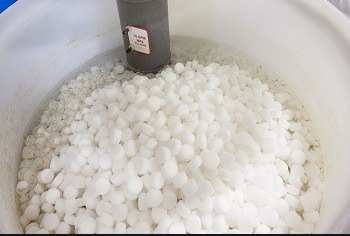 Standing water in a salt tank is a normal thing to some extent but if you are experiencing more than usual water overflow, then this is something to worry about. Therefore you must have to check what’s wrong with it.

So let’s get started!

My water softener is full of water is the main issue I am facing nowadays. The brine tank has a waft or float that controls the brine level. It’s just like the same waft that we have in our toilet tanks. If the incoming brine line hose is not securely attached, the waft won’t stop the water flow at the correct level. Therefore, the possible reason for water in the softener tank can be the insecure attachment of the incoming brine line.  So to get rid of this problem, make sure that the line and waft are insecure positions.

Bottom of the Tank Might Be Clogged With Salt:

The brine tank has horizontal slots that control the overflow of water from the bottom. If there is any salt buildup in the tank that will clog these horizontal slots, then it will be difficult for slots to reduce the overflow of water. This could be one of the possible reasons for the water softener tank full of water. If you feel like it’s the culprit, then it’s time to clean the brine tank, Water softener full of water, water softener problems water in salt tank.

Drain Line May Have Malfunctioned:

One possible reason for abnormal brine tank water level is the malfunctioning of the drain line. It might be possible that the drain line has a kink in it or it could be damaged. To solve this problem, the only solution is to replace the drain line with a new one. 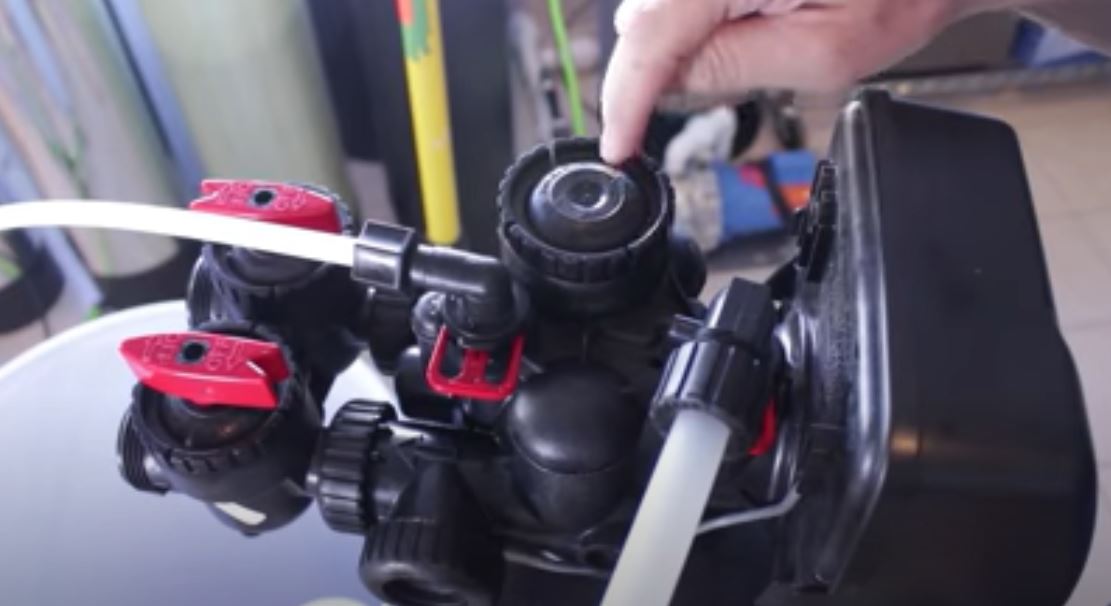 Control Valve May Be Clogged:

Most of the time the control valve becomes blocked or clogged. It usually happens when you are using well water for softening. The reason is, well water has lots of minerals and iron in it that may damage Softener resin which clogs the control valve. If you think this is the reason for water in the brine tank, then its tie to clean the valve.

Injector May Be Clogged:

One of the possible reasons for standing water in the brine tank could be a clogged injector. This problem usually arises when you are using water with high iron content. You can easily get rid of this problem by cleaning the clogged injector. You can use a wooden toothpick to clean this injector but you have to be very careful while cleaning it because it can damage easily. The best option is to use cleaning products such as Calcium lime rust (CLR) remover to clean the injector. Otherwise, you can replace it.

Brine Level Control May Be Out of Order:

If none of the above issues are the reason for brine tank water level, then there are chances that the brine level control may have malfunctioned. The float of brine level control and incoming line are securely attached. If the float becomes clogged it cannot move freely. So it’s better to check it and if it’s clogged, then remove it for cleaning. Don’t forget to keep the cap of the top of the brine well, otherwise, salt can get into the well and cause a blockage.

If all the above things are alight and still facing an issue, then there might be some problem with the circuit board. By hiring a professional electrician you can replace the malfunctioned circuit board with the new one.

Well, the above-mentioned issues are the common reasons for standing water in the salt tank. But if you have been using a water softener for a long time then there might be some technical reasons for standing water in the brine tank. A water softener is machinery that depreciates its life with the passage of time. The spacer stack and pistons in the water softener wear out with time. You can confirm it, by disconnecting the drain and brine line while the valve is operating. If water is still flowing over the valve, then it’s time to replace the spacer stack and pistons.

Let me tell you one important thing, changing base plate spacer stack or pistons is not a cup of tea for everyone. Every Tom, Dick, and Harry cannot replace as it is not a DIY project. So it’s better to call a professional to replace base plates, spacer stacks, and pistons.

We recommend keeping your water softener salt level at least one-quarter full of water at all times and no more than four to six inches below the top of the tank for maximum efficiency. Make sure the salt level is always a few inches above the water level.

If the softener brine drain is kinked, plugged, or leaky, you’ll get to replace the drain line. A professional Plumber can do this for you. If your drain line flow control is clogged, the water cannot flow through the system properly. You have to clean any clogs.

When to Clean Brine Tank?

It is recommended to clean the brine tank on yearly basis. This will increase the work efficiency of the water softener.

How Much Water Should Be in My Water Softener Brine Tank After Regeneration?

It is normal to have 6 to 10 inches of water in the brine tank. Remember, the higher amount of water will interfere with the regeneration process.

Why Is My Brine Tank Empty?

It could be because of mushing. If the salt in the brine tank is packed too loosely, it can change into small crystal which creates a mass of salt at the bottom of the tank. This mass prevents the refilling of the brine tank.

Should there be water in my water softener salt tank?

There will commonly be several gallons of water in the bottom of the brine tank but is never more than twelve inches high. We recommend that you check the salt level in your brine tank monthly. The more frequently your system redevelops, the more you’ll need to check and add salt to the tank.

How much salt should I have in my brine tank?

You should keep your brine tank at least one-quarter full of water softener salt all the time and not more than four to six inches below the top of the tank for best productivity.

Should my water softener salt tank have standing water in it?

Adding some salt in the near future is nothing to be concerned about, but standing water can indicate a problem. The components that regulate water intake may allow the tank to overfill, or the water may not be drawn down after regeneration.

How do you get excess water out of a brine tank?

Why is my brine tank full of water?

If you have a brine tank, some debris may go into the tank and get sucked up through the valve. One of the most common reasons for too much water in your brine tank is an injector obstruction. The small hole on an injector will create suction or venturi to draw up water. If it becomes clogged, it might need to be removed and cleaned.

How much water should be in the brine tank after regeneration?

That is about 15-25 centimeters of water. When the water is in your tank, it will stay there even if you are not regenerating your water. If you have more salt in your water than water, you will not see the water.

Does the brine tank fill with water during regeneration?

The brine tank is shorter than the media tank, and it contains salt. This salt helps the system when it has too many minerals. The two tanks are connected by a pipe that feeds water from one to another when the system needs it.

Why is my brine tank half full of water?

The common reason for too much water in a brine tank is an obstruction of the injector. The injector has a small hole that creates suction. If the hole gets blocked, it needs to be removed and cleaned.

Can you overfill a water softener with salt?

Adding too much salt to your water quality softener can cause salt “bridging,” or a buildup and solidification of regenerant. This buildup can prevent your system from regenerating correctly.

When you put in excessive salt, it can cause salt “bridging,” or a buildup and solidification of regenerant. This accumulation might prevent your system from regenerating effectively.

Should water be above salt in brine tank?

You need to have a little less water than salt in your brine tank. This is, so the water touches the salt and absorbs it. The water needs to be lower than the salt.

Why is there no water in my brine tank?

Many things could be blocking the pipes. Maybe it is the drain line, injector or brine line valve, or something else. You need to figure out what is wrong and remove it.

How does the brine tank fill with water?

Brine Tank Fill: The media tank will supply water to the brine tank. The water and salt will mix and make a solution called brine.

How do I know if my brine tank is clogged?

How do you unclog a brine tank?

Pour soap and water into a container. Use a brush to scrub inside the brine tank. Finish by dumping out the mixture and rinsing it with water. Now pour 2-3 gallons of clean water into the brine tank. Add a quarter cup of bleach to the tank.

How do you fix too much water in a brine tank?

Why is my water softener stuck in regeneration?

If your softener is not working, it might be clogged. You can tell if it is clogged by looking for the following things: 1) the brine line/valve, 2) injector/venturi, 3) drain line/control.

What does brine tank float do?

Can I drain my water softener outside?

What happens if not enough water in the brine tank?

The water softener regeneration cycle will be insufficient if too little water enters the salt or brine tank, and the water conditioner will not effectively reduce hardness.

Can I overfill my brine tank?

To prevent salt snafus, use high-quality salt pellets, which substantially minimize the chance of any issues – especially salt mushing. Finally, don’t fill your brine tank to the brim. It prevents older salt from adhering to the walls of the tank if it’s half-filled.

How to drain brine tank on water softener?

A wet-dry vacuum, also known as a shop-vac, can quickly and efficiently remove the water within your water softener brine tank if you don’t want to empty it all manually. Shop vacs with a wet/dry option are intended to collect both water and dry things.

Where does a water softener need to drain?

A softener drain line must not be directly connected to the waste system but rather emptied into a laundry tray, floor drain, or properly trapped unique outlet. To guarantee an air gap of at least two times the diameter of the drain line and no less than 1-1/2″ above the top of the receptacle used.

Is it OK to drain water softener into the septic tank?

Efficiency-rated water softeners, on the other hand, have been found to have no negative impact on septic tank performance in homes with a sewage system that uses a water softener. In addition, over half of the septic systems are linked to a water softener.

BestWaterSoftenerBlog spends hours in researching and analyzing products to recommend the best picks for valued consumers.