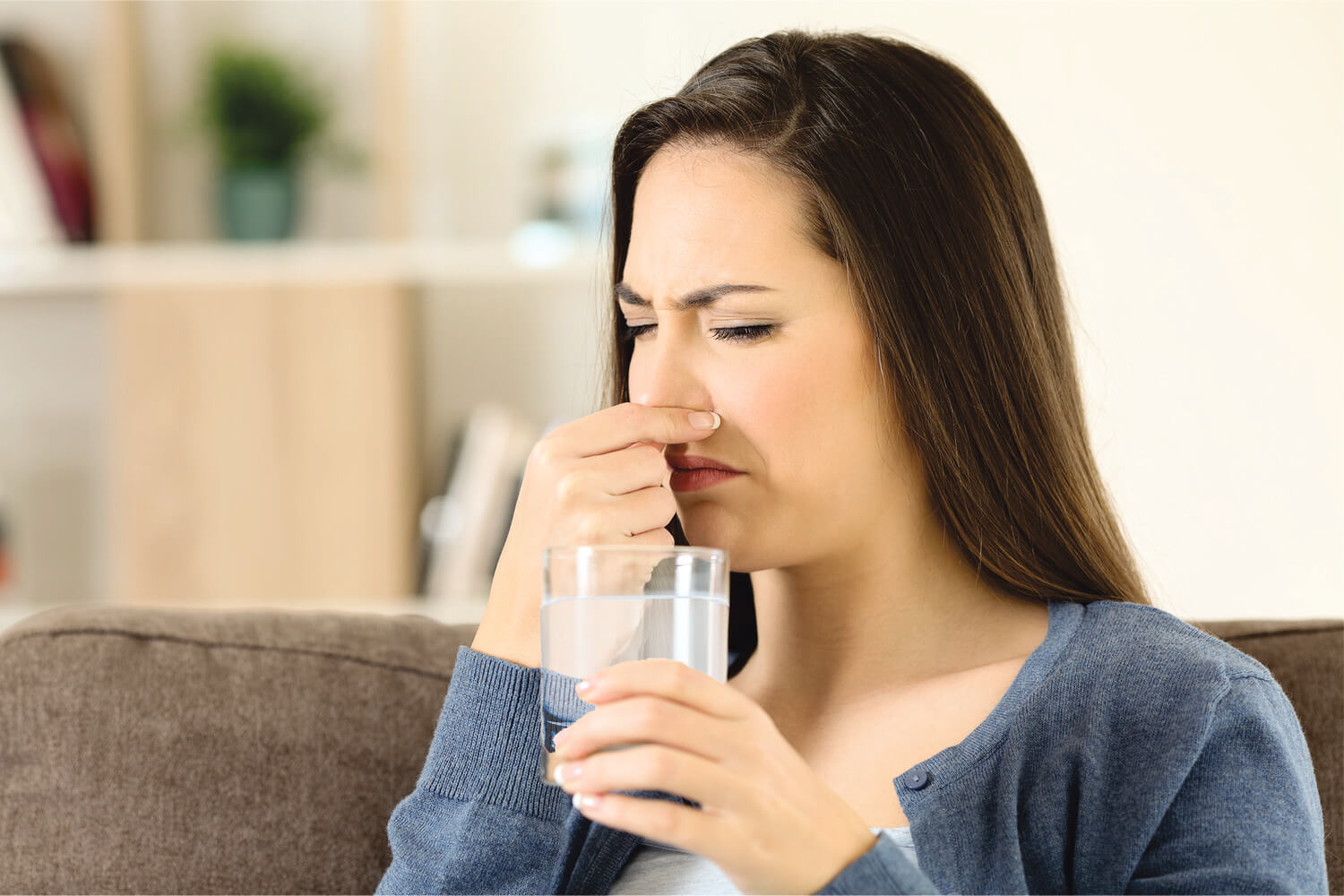 If your water smells like bleach, don’t worry. It’s not dangerous and is quite common. Bleach has a strong chemical odor that can be detected in the air or on surfaces when too much of it is in contact with them. Water that smells like bleach is caused by chlorine or chloramine disinfection. This article will cover what causes water to smell like bleach and how you can get rid of the problem before it becomes worse.

Your water likely smells like bleach because the EPA requires small amounts of chlorine in the water. This helps us to keep people from getting sick with waterborne illnesses. It has been used as a disinfectant for over 100 years.

When your water smells like bleach, it might be because there is too much chlorine. When the water starts to travel over long distances, they add more chlorine to keep it clean longer.

Water may smell like bleach due to following reasons.

1. You may have a water leak

3. A new home or building is being constructed nearby, and it’s using bleach to clean up the site

4. It could also be due to an old septic tank that needs to be pumped out or replaced

5. Your pipes are probably corroded, which causes rotten egg odor in your water supply

6. If you’re on well-water, there may be sulfur bacteria growing inside your well.

You might smell bleach in the water. This is likely because of high levels of chlorine. If you boil or chill the water, it will not smell like bleach anymore. The government requires people to use chlorine in public water systems but recommends levels lower than 4mg/L. You can smell chlorine at 1mg/L.

How Do I Fix it When My Water Smells like Bleach?

There are many options for you to avoid the harmful effects of chlorine. You can purchase a water filter or use multiple filters, each with its own set of advantages and disadvantages depending on what your needs may be at any given time. One option that will always work is just getting rid of it altogether by installing an efficient reverse osmosis system into your home’s plumbing system.

If you want to know just how chlorinated your tap water is, take a quick test yourself with one of these at-home kits. They’re easy, and the results will accurately read any harmful contaminants such as lead or pesticides that may be lurking in their depths!

The average person’s tap contains about 3-5ppm (parts per million), while some people only need 0.7ppms for their needs. These levels may not pose any problems unless they exceed 10 ppm or 50 ppb, respectively, which could cause shortness of breath/ difficulty breathing from asthma, among other things.

If your tap water smells like bleach, don’t worry. You will likely need to replace the chlorination system with an activated carbon one for it to work effectively and reduce any residue left behind on dishes or clothes after using hot water from time to time if this has often been happening lately. There isn’t much else people can do about getting rid of those pungent odors which are only going away because they haven’t already gone entirely anywhere by now so make sure not forget doing some research into what type would be best suited.

If your water contains more than 4 ppm of chlorine, call your tap’s utility provider immediately to report the problem. If you’re experiencing a strong bleach smell and would instead not use filters that attach directly under sinks or kitchen faucets, then consider purchasing an advanced Filtrete Advanced system with its built-in filter. This will reduce bad tastes and odors while also improving swimming pool water quality for those who enjoy using one.

Can Boiling Help Remove the Chlorine?

The most likely reason your water smells like bleach is that there are more chlorine ions in it. A small amount of chlorine is required by the EPA. This is because it aids in the removal of waterborne diseases. You’ll detect the bleach odor when your water has been over-chlorinated.

Is it safe to drink water that smells like bleach?

Chlorine in tap water might cause your drinking water to have a chlorine or chlorinated taste and may lead to dry, brittle skin as well as unmanageable hair. Water is considered safe if the chlorine/chloramine levels do not exceed 4 mg per liter.

What do I do if my water smells like chlorine?

As the water cools, the chlorine odor naturally dissipates. Filter your water with a particular pitcher that includes a filter. Boil your water for about 20 minutes to evaporate the chlorine.

If your well water smells like chlorine, it’s most likely been contaminated. Chlorine ingestion can be hazardous and even deadly at high levels. If excessive chlorine is discovered in the well, it will need to be flushed out.

If your well water smells like chlorine, the well has likely been contaminated. It’s not only expensive and inconvenient, but chlorine ingestion can be harmful and even deadly. If too much chlorine is discovered, the well must be flushed to eliminate the chemical.

The most likely cause of your water smelling like bleach is an increase in chlorine. Chlorine and chloramine are the most popular disinfection chemicals utilized by municipalities.

The smell of chlorine indicates a high presence of chloramines, barium, or cadmium. Chloramine is an ammonia-chlorine combination that is used to purify public water. On the other hand, Chloramines give off a strong odor as they are used to eliminate potentially dangerous pollutants from your water.

How do you fix smelly water?

Chlorine gas is a respiratory irritant that the human nose can detect at extremely low concentrations (0.2-0.4 ppm in the air, equaling four drops of ink in a 55-gallon barrel of water). At these low doses, chlorine gas has a bleach-like odor.

How do you remove the Sulphur smell from water?

Medium to high (greater than 6 mg/l) levels of hydrogen sulfide can be effectively removed by chlorine bleach. The chlorine in the bleach reacts with (oxidizes) the hydrogen sulfide, eliminating the “rotten egg” stench. Chlorine bleach, like other chlorine-based cleaners, interacts with iron and manganese; it is also used to disinfect water.

Heating causes hydrogen sulfide gas to become lighter, which results in a foul “rotten egg” odor and taste. The scent is generally only noticed when the water is first turned on or when hot water is run. Heat drives the gas into the air, which may make showering particularly unpleasant.

The most common cause of smelly water is anaerobic bacteria. They exist in some water and react with the magnesium and aluminum sacrificial anodes that most water heaters produce hydrogen sulfide gas. This makes a smell like rotten eggs.

The chlorine in your tap water is likely to be the source of the bleach aroma. Small traces of chlorine in your water are safe. It is required by the EPA (Environmental Protection Agency) as part of a larger plan to disinfect water before it is sent to homes and businesses.

Yes, boiling water for 15 minutes is one effective technique to eliminate all of the chlorine from tap water. Chlorine gas is less dense than air at room temperature and will evaporate without requiring boiling away. Heating water to a boil aids in the chlorine removal process.

Is it safe to shower in water that smells like sulfur?

If you detect a rotten egg stench in your water, you’re probably concerned whether you and your family are safe. A sulfur-containing odor is an indication that the concentrations of sulfur in your water are too high. Good, clean drinking water has no taste or odor and isn’t harmful to your health.

Yes. The amount of chlorine in drinking water is regulated by the US Environmental Protection Agency (EPA). Chlorine levels used for drinking water disinfection are unlikely to have long-term health consequences.

Sulfur water at high doses can cause nausea and illness. However, in most homes in the United States, sulfur water consumption is safe since the sulfate and hydrogen sulfide concentrations are low.