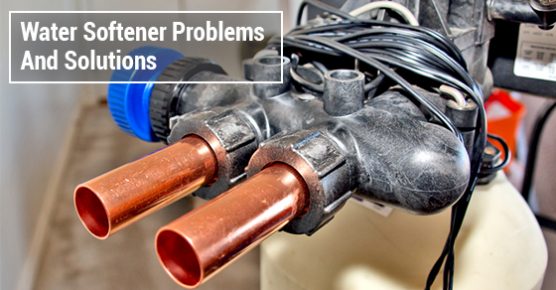 Last Updated on 9 months by

A few months ago I realized that my water softener is not softening water. We even start observing limescale build-up on washroom sanitary. This was a thing to worry about, as we operate the dishwasher daily. I called and consult different professionals and expert plumbers but still, the problem was there. In the meantime, I researched a lot about the water softener problems and got to know that, it’s all because of salt build-up inside the tank.

And you know what; it took 10-15 minutes to fix the problem that I have been trying to solve for the past couple of months.

Since I researched a lot about water softener problems so I decided to get other some benefit from it.

Time is precious and so money is.

Don’t waste it on different plumbers for guessing the problem.

Therefore, for your convenience, I have jotted down all the possible problems of water softener in this article.

Just scroll down to find your desired water softener problem and get the solution right now.

There could be numerous reasons behind low water pressure such as:

Problem 2: Hard Water and Soft Water Get Mixed Up

This problem is caused by the improperly cut distributer. If it is cut too short, the distributor can’t reach O- ring in the control valve in the brine draw thereby producing the mixed water.

Put the water valve in brine draw and see how long it takes for saltwater to reach the drain, if salty water reaches the drain, chances are distributor is short. Check both O- ring and distributor.

Problem 3: Water Meter Is Not Working

When the water meter is not working properly and not showing any water usage display. Probably, the reason could be:

The water meter displays information about water usage. If it does not do so, then it is recommended to

Either Replace the water flow meter or replace the timer with a new one.

Sometimes water leaks through the drain due to piston seal failure despite being valve in the service position. Also, it may be because of cracked water-carrying components.

Check the piston and pinched or torn. The seal should be replaced. If you found any foreign material between the piston seals and piston try to get rid of it. if it’s because of any crack in the water carrying component then replace it with a new one.

Problem 5: Brine Tank Is Filling With Water Instead of Drawing Brine Into the Softener:

This happens when the control valve is in the brine draw position but is refilling the tank instead. The culprit is the back pressure on the injector.

Problem 6: The Brain Tank Is Overflow:

The control valve is putting too much water in the brine tank. This is less likely to happen if the valve is installed with a safety brine valve.

Look at the O-ring inside the brine valve to check if it’s pinched or missed.

Following are the possible reason for salty output water

Try to unclog the drain hose. If the rotor valve or its seal is the culprit, then replace it with the new one. Because the rotary valve directs the water to a softener to soften it and flush the resins filter.

Sometimes softener produces hard water. Producing hard water is not a softener’s job.  The following could be the possible reason behind it:

Once you have found the culprit behind this problem, try to solve it by:

Sometimes water softeners can’t hold iron and thereby start releasing a high amount of iron in the water. Possibly the problem lies in the regeneration process.

For this, you should increase the regeneration frequency. You can also use different water softener cleaners through your system to get rid of iron.

Resin beads are termed as faulty if they fail to trap calcium and magnesium. Also, you will notice parts of the resin bead in the output water.

If you notice your system recharging more frequently, or you find small parts of beads in your water you need to replace the beads or clean them.

Water softeners are really very helpful and affordable products, but they require regular checkup. Checking up is minimal and very cheap. Few practical and very handy tips are given below.

Water softeners are a popular water treatment system that can remove up to 80% of the dissolved minerals from water. However, water softener problems can often arise and need to be addressed to function properly.

There are many potential causes of water softener problems, such as hard water, over-softening, improper installation, and more. Here we will discuss some of the most common water softener problems and how they can be fixed! Water softeners can look complicated, but they are often really easy to fix. There are two things you need to do. First, identify the problem. Second, buy the tools that will fix it.

A 4-in-1 screwdriver, A bucket, and a vacuum cleaner

Sometimes a salt tank is full of water. This happens because there is no place for the water to go or be blocked off. But it can also happen for other reasons. When you have a problem with your salt tank, determining the valid reason why it is wet may assist you in troubleshooting the unit correctly. The following are some of the most frequent reasons why water can get into your salt tank:

Salts are also scaling in your system’s casing and lines, which is why salt-based water softeners don’t work when they’re used with a non-salt-based system. Salt crust sometimes forms with water softeners, which can break down any time you need to change your old tank. Don’t let this build-up interfere with the life of your unit. Bridges of salt form around the edges of a tank. You can fix this by breaking and removing the crust or cleaning up any salt on top of your tank.

At least once in our lives, we’ve all seen stomach-turning brown water spurt from the tap. It’s easy to see why this water is unsuitable for consumption, but if you have a water softener, you might be wondering whether it’s to blame for the problem coming from the softener. It is often caused by worn-out pipes or high amounts of dirt in the water. But there is also a chance that bacteria may cause brown water in your softener. To rule out the possibility that this is a water-softening issue, sterilize your system with chlorine or hydrogen peroxide. Fill the brine tank with two cups of the sterilizer and run two or three regeneration cycles before draining your pumping.

If the salt level in the brine tank does not change over time, it indicates that no salt was used. As a result, there is no ions exchange, so no softening of hard water occurs. This makes the system ineffective unless you solve the issues listed above. To get the benefits of softened water, repair the salt bridge problem.

We already talked about what happens when the brine tank is too full. But what if the brine tank water is too low? Although many people are perplexed as to why their salt tank isn’t producing any water, they know that this is acceptable and indicates that your system is functioning properly. There’s little chance of finding water in the tank unless the salt level drops significantly below half of the tank’s volume. If you do, follow the instructions in this post to resolve your system’s #1 problem and troubleshoot.

Freshwater softeners also use resin beads, which improve their efficiency. These beads generally endure as long as the system. However, they can break or lose their potential in some cases, necessitating more salt replenishment. If your resin beads are not working, you might notice floating particles in the water. This may be an aggravating problem, but the solution is quite simple. Following the instructions in your user manual, clean or replace the resin beads as needed. This problem is frequently simple to repair without spending a lot of money.

Water softener problems happen, and one might be that the water is not getting softened. One of the most common causes is salt build-up in the brine tank. But there may be other reasons too. If the bypass switch is turned off, water will not flow through the system. Water demand for your soft water system may be higher than the capacity of your system. The resin beads may not completely regenerate between softening cycles in this instance. Another cause of a weak water system might be an issue with the brine tank or resin beads. The first step is determining exactly what it is. Then, check your user manual for suggested troubleshooting. If you require more soft water than your system can provide, add extra Salt and run longer regeneration cycles to extend its capacity slightly.

Most homeowners have a problem with low water pressure. A water softener might cause the problem in the following cases:

Salty water might become a horrible experience, especially if you deal with the stomach ache aftertaste. Although most water softeners use salt to soften the hardness in the liquid, it must not be salty. If it is, that means there is something wrong with your system. You might be using too much Salt. The drain hose could also get clogged, and then you will not be able to flush the brine during regenerating cycles.

Water softeners use motors and can be very expensive. Motors can fail rather easily, and since water softeners require a motor to work, keep in mind that they may break. If the system stops working, the most likely reason is a motor failure. Before you conclude, check the cables. If they are not broken, the motor might not be starting up. If your system is still covered by warranty, contact the company that made it and ask for help. If your air conditioner is out of warranty or the motor isn’t covered, you’re out of luck. The only option left is to buy a new motor or a new system. Maintaining and following the use instructions will ensure that your engine stays in working order, as it is rather costly to repair or replace one.

As you can see, most water softener problems are straightforward to address and require minimal effort. We hope the advice given above will assist you in resolving water softener issues regardless of brand. However, if you’re unsure, call a professional to avoid causing any more damage to your equipment.